Following on from yesterday, not being able to connect the camera to the computer seems to be a problem with the USB cable; apparently not all USB cables are created equally. Unfortunately I only brought one suitable cable with me so we'll have to wait until get home before we can see what I have filmed. This is somewhat ironic as I brought with me my home computer in order to transfer the videos. This also causes another problem: my home computer happily connects to work via a VPN whilst I am home, but it's a different story when I'm abroad. Eventually I was able to connect to work last night and this morning in order to send reports and do a little maintenance. I don't remember having such problems with my work computer when abroad. But this may well have to do with which ports are open in the router through which I am connecting and so the work computer might also have such problems. Anyway, enough of the commentary of technical problems and on to the holiday!

The hotel has a rooftop patio which allows a view of the Pisa skyline. I was up there yesterday evening, but the sun was right behind the leaning tower so I couldn't film it well. I went up again early this morning and got a much better result.

After breakfast, we set out for the railway station in order to travel to Riomaggiore, which is the southern-most village of the five, and supposedly second best after Monterosso. Getting to the train station from our hotel is very easy: walk about 50 metres south, turn right, walk another ten metres, turn right - and then one is on the road which leads directly to the train station. True, one has to walk for about 15 minutes (or stroll for half an hour), but it's an easy walk which is all pedestrianised. There are shops along most of the way, which makes the walk interesting, but in the morning (just after 9am) most were closed. Few people were walking the way which we were, but many were coming the other way.

We arrived at the train station at about 9:40, which left us 15 minutes in which to buy tickets and find the platform. I tried my luck on the automatic vending machine: first class to La Spezia plus a ticket to Riomaggiore would cost €48 (La Spezia to Riomaggiore costs €4). We had to go first class as there were no second class tickets available. For some reason, the machine would not accept my credit card so I had to pay in cash. After having paid, I realised that I should have pressed the 'credit card' button which would have caused the machine to accept the credit card. We validated the tickets then found platform 5. The arrival of the train was preceded with an announcement that the first class carriages were at the back of the train, so we started walking to the back. When the train did arrive, the first class carriages were of course at the front, so we had to retrace our steps. First class tickets come with pre-assigned seats, so we found them and had a pleasant journey to La Spezia. There we changed trains, finding a seat on a very crowded local train to our destination. 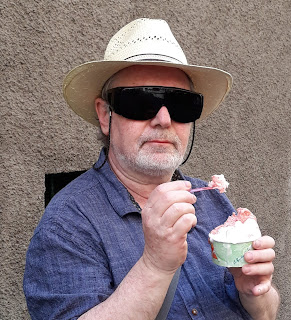 Once at Riomaggiore, we wandered around for a little until we realised that the village is not where the train station is, but rather a few hundred metres south; one gets there via a tunnel, which is next to the train tunnel! Once out of the tunnel, the main tourist road of Riomaggiore reminded me of the tourist road in Amalfi: twisty and going uphill. Our first task was to buy hats: I broke with my long standing tradition of buying a baseball hat of wherever I was, and bought a fedora. After wandering around a little, I had my first taste of ice cream for this trip - lemon and strawberry. Good, but not excellent.


We then descended to the harbour area in order to see what our options where regarding sailing to another village. Although there are boats from Riomaggiore, they seem only to sail to Monterosso, and as we've already been there, we decided to forego the experience. So we looked for a restaurant which serves fish - as opposed to seafood - and eventually found one. We both ordered grilled sea bass; I think this was the best sea bass I've ever eaten, really tasty. Below appears the fish after the waiter had skillfully deboned it. 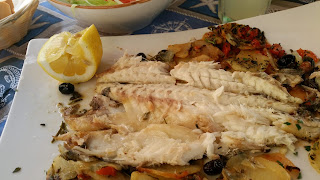 After lunch, we realised that there wasn't more to do, so we returned to the small train station and bought tickets for La Spezia. The train came shortly afterwards, but after alighting in La Spezia (and buying tickets back to Piza, this time with the credit card - only €7.60 each), we had to wait over half an hour for our train, which stopped at every station on the way (the train in the morning stopped at only two stations before La Spezia, which probably accounts for the difference in price).

We arrived back in Pisa at 5pm; our first port of call was a cafe in the nearby piazza, where we had a good cup of tea and some cake. Walking back to our hotel, the road was full of people - but again, most walking the other way (i.e. to the station). Into the hotel and shower. The weather in Pisa is partially cloudy, but it was hot (28 °C) in Riomaggiore.

I think that Monterosso was better than Riomaggiore; today was good but not excellent. Tomorrow we will travel to Lucca.
Posted by No'am Newman at 8:21 pm