Look what they've done to my song

Running through my mind are slightly misremembered words from Melanie Safka's song from 1971, "Look what they've done to my song".

(The real lyrics are available here)

Why should these words suddenly pop into my head? Because last night there was a palace revolution, a coup d'etat, and I was replaced as the musical director of the children's show. Not, I hasten to add, because of anything that I might have done, but because of circumstances and because the director wishes to work with someone else.

Of course I'm hurt and I'm insulted, but hey - it's show business.

What really hurts is that it's my son's party, and now all the enjoyment that I should derive from it has withered into nothing. Naturally I will have - by choice - nothing further to do with the production of the show and will see it for the first time only days before the grand performance (actually there will be two performances before audiences: the first before the invited guests from outside, and the second for the kibbutz).

As my wife pointed out, the director is the one who prevaricated for the last month and prevented much work being done in advance. She (the director) has made her bed and now she must lie in it.

I think of a pyschology book called "Learned Optimism" by Martin Seligman which I bought last summer and subsequently lent to a clinical psychologist here. What would the book tell me? It is not my fault. I do not have to bear responsibility for this. I should see this as a good thing: I will now have my evenings free for the next few weeks and not have to suffer burn out as I did when my daughter performed in her barmitzva show.

What hurts the most is that this marks the end of the 'age of volunteering'. Why bother volunteering to do something for free when afterwards someone can turn round and say "Thank you very much, but I'm paying someone else to do the job".
Posted by No'am Newman at 7:37 am No comments:

Another week goes by

We left our hero rehearsing songs for the harvest festival on a sad Thursday afternoon. After another long rehearsal on Friday afternoon, the band were ready to accompany the songs during the hour long ceremony. I think that the performance went well, although by the end, I was very tired and could hardly move my left arm (all those barre chords). Here's a photo 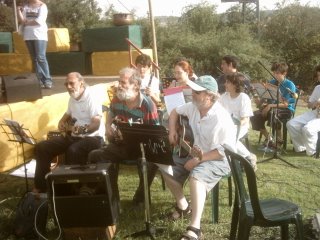 I'm the one with the green cap on the right hand side. Isn't it strange that all the wind instruments are played by children (the oldest is 17), whereas the guitars are all played by aging bearded men (I'm the youngest and I'll be 50 shortly!).

We've been in the midst of a three week heat wave which only broke two days ago. Until then, we've had temperatures reaching 37°C outside (nearly 100 degrees F). Of course, our air conditioner stopped working in the first days of the heat wave and as a result the temperature in the lounge has often reached 31°C, making it almost unbearable to be inside. During the week, things weren't so bad, because I could spend all day in my air-conditioned office, but the weekends were tough. Anyway, we've now got a new air conditioner installed - only to find that the temperatures have dropped and we don't need to turn it on. The weather forecast predicts that the great furnace in the sky is going to heat up again on Tuesday.

I went swimming for the first time this season on Sunday evening. We have an open air pool which traditionally opens at Shavu'ot, and from 6:30pm to 7:30pm is an hour set aside for adults who want to swim lengths. After swimming several lengths breast stroke, my left shoulder began aching, so I decided to swim one length back stroke and then stop. Just as well, as that length left me totally knackered, so much so that I couldn't do anything all evening.

On Monday I finally was told some of the songs which are going to be in the children's show in mid-July which is the climax of their bar mitzva year. The person who has been chosen to be the director has - in my opinion - been vacillating and wasting valuable time by not informing us, the writer and musical director, what is needed. As soon as I knew, I set to work. The first two evenings I spent arranging one song in a variety of styles; these will form the incidental music between scenes. Once those were out of the way, I could tackle the closing song. This was ironically the closing song of the Shavu'ot festival (albeit with different words), so its chord structure was fresh in my mind.

After one evening's work produced a two verse version which was very stilted and not really there, I started afresh with a different intro (shamelessly adapted from the opening of Kate Bush's "Cloudbusting") which then led into a much better version. My instructions were "four verses and be bombastic"; my songs don't normally have so many verses, and I try my hardest NOT to be bombastic, so this was quite a challenge. Anyway, by Thursday evening I had an almost complete version, and I spend Friday afternoon polishing it up. By this time I had received the new lyrics and recorded a few takes as a demo.

Earlier on Friday afternoon, I, along with most of the kibbutz and a large number of people from outside, attended the funeral of the member who had died the week before. Jewish tradition prefers that the funeral take place as soon as possible, which is normally the same day or the day after death, but in this case, the body had to be flown back from Russia, and of course the arrangements take time. It was a long funeral in which many people felt inspired to speak. As opposed to non-Jewish funerals which I've seen (on television), all the speeches were made at the graveside whilst the mourners stand under the sweltering sun.

I often have mixed feelings about these funerals. Whilst attending them is a mark of respect, there's no one standing around with a card marking who attends and who does not. The person who should be hearing all the epitaphs is the one person who can't hear them. It's more important - and more personal - to visit the bereaved family after the funeral. I've written about this before at length so I won't go into it again.

The Jewish festival Shavu'ot means different things to different people. Coming exactly seven weeks after Passover, Shavu'ot is one of the pilgrim festival when people are supposed to visit Jerusalem. It is the harvest festival. It is also the time that Moses was presented with the ten commandments.

My son and his friends have been rehearsing a dance for the ceremony for the last week. As they are at an age where their bodies are betraying them on a daily basis, dancing is the last thing on their minds, and so there have been frequent rehearsals. As a few of the children are musically minded, I wrote a short arrangement of a song which frequently features in one or other of the Shavu'ot ceremonies. This was originally for trumpet, clarinet and saxophone; after I learnt that the boy who played the trumpet has ceased to do so, his part was amended for the flute. Last week, I learnt that the girl who plays the flute does not want to do so any more, so I had to rewrite the arrangement for clarinet and saxophone only.

For varying reasons, we haven't had much time to rehearse. We finally met on Tuesday evening, only to discover that I had transposed the saxophone part into the wrong key. End of rehearsal. The next day I went over the arrangement and changed the transposition. We met - by chance - at 10pm, and had a half hour rehearsal which went very well. The children told me that they carried on until midnight. We had another rehearsal today at 1:30pm, which showed that they had been working on their playing. This was very good, and my parting suggestion was that they put themselves into the freezer, to be defrosted this evening at 8:30pm.

At about half past three, just as I was preparing to take part in rehearsals of my own for the harvest festival music on Friday, we received a phone call saying that a member of the kibbutz had died (apparently of a heart attack) whilst on holiday in Russia, and so the ceremony for tonight was cancelled.

Apart from the shock and surprise (and also concern for the poor wife who had gone on holiday and was now faced with the unpleasant task of arranging for the return of the body to Israel), I admit that I had the ignoble thought that it was a shame that he picked today to die, and so waste all the hard work that the children had done. Why couldn't he have died yesterday or on Saturday? Or even better, not die at all.

The harvest festival will still take place, although obviously it will be tinged with a certain sadness.

There's one fiendish song with which I was having trouble in the rehearsals: it starts off with a few bars in 3/4, then alternating bars of 2/4 and 3/4, then a few bars in 2/4, then some more 2/4 and 3/4. And in the first verse, my guitar is the lead instrument! After a couple of floundering verses, I discovered that by counting aloud the beats, I could play the song without too much difficulty. As the song is being played in C minor, I then realised that I could put a capo on the third fret and then play the song with total impunity in A minor. What had been like a raging tiger had now turned into a pussy cat. I've heard this song many times on the radio and have never been able to figure out its metric irregularities (bits of it were clearly in 3/4 and bits in 5/4, but I was never able to parse it), so I'm pleased that I've also managed to put this long lasting question away.

As the Americans say, happy holiday.
Posted by No'am Newman at 8:34 pm No comments: