Last week there was a spate of fires in Israel which caused thousands to become homeless within minutes. Not surprisingly, the occupational psychologist wanted to discuss backups with me. Apart from data which she copies to a 1TB external hard disk (I have one at home as well), a certain amount of data is constantly backed up and synced at Dropbox.

My dropbox account is limited to 2GB, which is fine for the OP data and programs along with doctoral material, but as it no longer works with Windows XP (my home computer), I don't use it so much. I have a 50GB account with Mega, which is much more useful (I wrote about it here), but was under the impression that like Dropbox, my Mega account is mirrored on all of my computers. This isn't such a good idea if I have songs stored on one hard drive, photos on another and programs on a third.

I discovered that I can split the Mega account into two - one part is in permanent synchronisation, mirrored by a directory on my computers, and the other part is stored solely 'in the cloud' with no synchronisation. Thus yesterday I copied a few GB of song files to this new directory and was pleased to see that these files were not copied back to my computer. I'll continue copying files over the next few days - photos and songs - so that if a fire does take out our house and I'm not able to get home to retrieve the external disk, laptop and other gear, the files will still be safe.
Posted by No'am Newman at 1:03 pm No comments:

I don't know where this month has gone; lots of work, a new song, two virus attacks ... and several tv series, about which I'll write here. In no particular order ...
Here's a link to a piece in the Guardian about the show, and here are some photos. 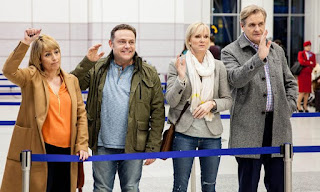 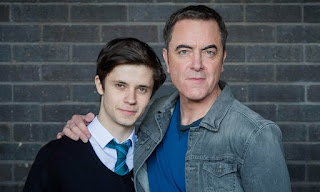 36 years ago, I played guitar and wrote arrangements for a little musical group which I had on the kibbutz. Joining me were Yvonne (flute), Jeremy (bass) and Shai (piano), with occasional vocals from a girl called Joy (about whom I don't remember anything; she was only with us for a few weeks). We used to practice on weekends when I was home from the army, and at some stage I must have suggested that we record a few songs.

Recording would have required some engineering pre-production: in order to have some semblance of separation between instruments and achieve some form of balance, we had the piano in one room, the guitar amplifier in the bathroom and the flute in the living room (where Jeremy and I also sat), each instrument with its own microphone. This meant that we all had to monitor via headphones, which meant that we needed some form of splitting the recorded input between four sets of headphones. I asked a friend who was somewhat technical to build a four way headphone splitter; his Heath Robinson contraption worked to some extent (I don't recall whether it was mono or stereo) but was unreliable.

We only managed to record one or two songs, without vocals, onto my stereo cassette deck. The idea would have been to feed the output from one cassette deck into another stereo cassette deck via a stereo mixer whilst adding vocals but this never happened. Twenty years later, I finally dubbed the vocal onto the instrumental track - but that's not the point of this blog.

A few months ago, I discovered on ebay a professionally built headphone splitter, or amplifier. When I saw it, I wasn't thinking of our group but rather of the problem which I have now with computer speakers. I use an A/B box to choose either headphones or speakers, but one speaker never seems to work. I changed speakers but had the same problem, which lead me to conclude that there was a problem amplifying the signal. The ebay headphone amplifier should solve this problem.

So I ordered the amplifier which arrived after a few weeks. When I plugged the power adapter into the mains (the unit requires 12v), I heard a 'phut' sound, almost certainly indicating that the flimsy power adapter had shorted; the unit did not work.

I then had a protracted correspondence with the vendors - initially they wouldn't take my word that the cable had shorted so I had to take photos to prove to them. They then graciously offered to refund my money whereas I would have preferred to have a new power adapter.

Yesterday I went to a local shop and bought a new power adapter; I couldn't find one with the correct requirements (12v, 250ma), so I had to settle for a unit which allows one to choose the voltage and the polarity of the head; the cable also comes with several heads, allowing the unit to be used with several devices. Of course, this power unit is also more expensive than a simple adapter; it cost me 40 NIS, which is about $12. The amplifier with adapter only cost $18! At least I am getting a refund from the company, so actually I am coming out on top.

The amplifier works perfectly; I can hear stereo via the speakers. I'm not too happy with the tone via the headphones, which might well mean problems when mixing new songs.
Posted by No'am Newman at 8:09 am No comments:

At the moment, the only work which I am doing on my doctorate is sending the user questionnaire to companies who have agreed to participate in my research and entering data from completed questionnaires into my data collection program. I also supposed to be arranging face to face interviews with representatives of the companies, but this requires energy which I seem to be lacking at the moment (or it may be a lack of time).

For the past few months, I have been travelling to Karmiel once a week. I know that one of the participating companies is only a ten minute walk from our factory there, so I thought that I could pop in to say hello when I am in the north and have some spare time. I wrote to my contact there proposing this a few weeks ago, but received no reply. I wrote again on Tuesday (I travel on Wednesdays), saying the same thing, but again, no reply. As I had some spare time yesterday, I decided that I would visit, whether it was suitable or not.

On the way to this company (it took 11 minutes to walk there!), I wondered what could be the reason for the lack of response. I decided that either my contact has been on an extended holiday or that he no longer works there. When I got to the building, I asked the receptionist for my contact. "Who?", she asked. I repeated the name. "Never heard of him" was the reply. Fortunately, someone was walking past as I asked the receptionist; this person informed us that my contact no longer works for the company (so my guess was correct). I then asked for the IT manager; I was given his name but told that he works in a different building, a few minutes walk away.

I had difficulty finding this building, but met an employee of this company on the street (he was getting out of his company car, which is how I knew that he worked for this company); he kindly took me to this second building. When I finally got to meet the IT manager, he was sitting with one of his staff, so I didn't feel too confident about breaking in (if I were a real Israeli, then I would just barge in). After I stated my name and purpose, the IT manager said that he vaguely remembered something about Priority research. What was more interesting was that the man sitting with him asked whether I am the No'am who posts frequently on the Internet Priority Users Group forum; when I said that I am that No'am, this man says that my postings are very clever and useful. In other words, I was validated.

I didn't want to disturb the manager too much (after all, my stated purpose was just to pop in and say hello, which I had accomplished), so I took his business card, saying that I would write him a full letter, explaining the research and enclosing the questionnaire. I wrote this letter about an hour ago, and also asked whether I could make an appointment in order to have a fuller discussion and complete the 'company questionnaire'.

There is an engineering college near our offices in Tel Aviv where I want to do the same thing (pop in and say hello), but there it's more difficult as I haven't had any contact with them yet.
Posted by No'am Newman at 11:35 am No comments: