For a long while, I have wanted to find a way to cook vegetables in the slow cooker in such a way that the vegetables get cooked but stay separate from everything else. The clearest expression of this wish occurs every Friday night when I cook chicken drumsticks and thighs, along with a melange of courgettes, carrots and onion. Towards the end of the cooking period I remove excess liquid which serves as the liquid for rice. My wife doesn't like rice and would prefer to eat potatoes, but she also doesn't like to eat the vegetable melange. If I could find a way of cooking a potato in the slow cooker without mixing it then she would be very pleased ( for those who don't know, one does not cook a potato whole in the slow cooker but rather chops it up into small cubes). 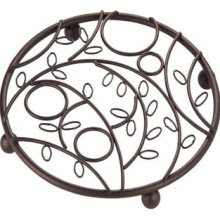 I have read about a technique with pressure cookers that uses something called trivets to keep certain items separate; when I google trivet, the primary results are frameworks made out of metal on which one places hot dishes - not what I want at all. The example on the left is the sort of thing which I have been finding. I have tried in the real world to find what I have been looking for but being unable to find a suitable word in Hebrew, I have had difficulty in cooking appliance shops ('trivet' translated into Hebrew gives the same word as 'tripod'). Yesterday, I dragged the old chestnut out again but started searching for 'perforated metal cooking', which at least gave me different results. 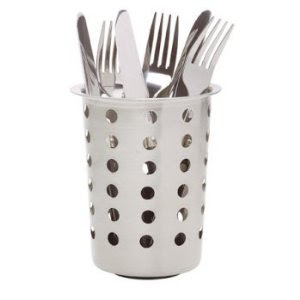 
My wife (of course) expressed doubt about this new culinary technique but was very pleased with the results. I asked her if she remembered where she had bought the container but she didn't recall; she also pointed out that such containers come in only one size which is too big - I was contemplating buying one and cutting it to size.


After dinner comes the ritual of throwing rubbish and taking the dog for a walk whilst getting my daily exercise. Such is the power of serendipity that next to the rubbish bin I found a plastic punnet which was exactly what I was looking for (and it turns out that there were two punnets stacked together)! 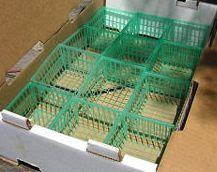 We were uncertain as to whether the punnet could resist the mild heat of the slow cooker; rather than wait until I cooked something (and so possibly ruin whatever was cooked), I put the punnets in the slow cooker, added a few cups of boiling water and then turned the cooker on for a few hours. The punnets passed this test without any damage.

Today's menu features salmon cutlets: I placed the salmon pieces on the floor of the slow cooker, poured over them a thin sauce of water, lemon juice, diced onion, butter and dill and then placed on top the salmon the two punnets, one with potato cubes and one with frozen green beans. When it comes time to serve, I will simply decant the contents of each punnet into a separate glass dish.

Finally I have the solution to cooking with but serving separate.
Posted by No'am Newman at 9:03 am No comments:

I posted a little puzzle the other day about four people having to cross a river with a canoe. As an experiment, I also gave the puzzle to a random selection of people at work; everybody gave the 19 minute solution sooner or later. I then asked whether it was possible to find a better solution; some people never answered at all, some said that there was no better solution and three people gave the better solution (one after ten minutes thought, the others after asking other people).

When I originally saw the puzzle, I too came up with the 19 minute answer, but immediately asked myself whether there was a better solution. My thinking went along the following lines
Or, in terms of how I put the naive solution:  Andrew and Brian cross (2 minutes), Andrew returns (1), Charles and David  cross (10), Brian returns (2), Andrew and Brian cross again (2). This solution requires only 17 minutes, thus saving 10% of the time.

I tried to check the mental processes of the other people; as they almost always started with Andrew and David crossing (10 minutes), they were stuck on the first stage.

What I've noticed with this kind of puzzle (as well as other sorts of ideas) is that the solutions seem easy after the event; the problem is how to make them easy before the event. Of course, if solving a problem were easy, then it wouldn't be a problem by definition.

Although I asked some of the people other puzzles (a tennis racquet and ball together cost $1.10; the racquet costs $1 more than the ball; how much does the ball cost?), almost all of the other puzzles depend on cognitive failure to make them puzzles, where the brain fixes on the wrong part of the question in order to solve the problem (incorrectly). These problems can indeed be solved easily if one thinks slowly and clearly (and if you thought that the tennis ball costs $0.10 then think again). The above is the first question in the Cognitive Reflection Test; the others are
Posted by No'am Newman at 3:15 pm No comments:

That's why God made the radio

I've been listening on and off for the past week to the Beach Boys' newest (and probably last) cd with various levels of interest. I've listened closely with headphones, heard it whilst driving in the car and have played it on my computer at work when wrestling with numbers which should know better. My learned conclusion is that the title track is the only BB song one ever need hear (ok, I'll throw in 'God Only Knows' and 'Good Vibrations' as well); it's a perfect encapsulation of all their songs. It features staggering harmonies, intriguing chord progressions (and modulations) and cascading melodies.

The following track, "Isn't it time", also displays a few classic BB touches, even if it starts off a bit ragged. Of course, there is something seriously strange about listening to a bunch of seventy year olds singing "Isn't it time we danced the night away" (mind you, if sixty is the new forty, then I suppose that seventy is the new fifty). But how does one accept "Isn't it time we went steady again"?? There's even a harmony break straight out of 'Darling', from forty odd years ago.

After these two tracks, the whole disc subsides into aural wallpaper and it wouldn't be fair to write criticism about them for I admit to not having listened too closely.
Posted by No'am Newman at 2:24 pm No comments:

I've been feeling a small 'intellectual void' in the past few weeks: many things which have occupied my time seem to be winding down and I don't know how I'll be stimulating my brain in the coming months. In an attempt to jump-start the process, I found some texts on operations research, a subject which I thought might interest me. From the little that I've seen, this subject seems to be based on mathematics and appears somewhat heavy.

Here is a little puzzle from the first chapter of one of the books - Andrew, Brian, Charles and David (names changed to protect the guilty) are standing on the east bank of a river and wish to cross to the west side, using a canoe, which can hold at most two people at one time. Andrew, being the most athletic, can row across the river in one minute; Brian, Charles and David require 2, 5 and 10 minutes, respectively. If two people are in the canoe then the slower person dictates the crossing time. The objective is for all four people to be on the west bank of the river in the shortest possible time.