After turning our backs on Italy in favour of Greece last year, it's back to Italy. This year, we're starting off in Pisa then moving further north to Torino (Turin) for almost a week.

Pisa itself - apart from the tower - is not much of a big deal. The reason why we are here is that we can see the tower, it's reasonably cheap, and it's easy to get from here to Cinqua Terre, which is where we will be tomorrow.

Our flight left Israel at 9:25 am which is a very civilised hour. We were in Rome just after 12, and our connecting flight to Pisa took off just after 2pm. After a flight of less than an hour, we arrived at the somewhat dilapidated Galileo Galilei Pisa International Airport; a driver picked us up and took us to the hotel. Whilst a driver is something of a luxury, it's needed as we would never have managed to navigate the small streets of the old town of Pisa. 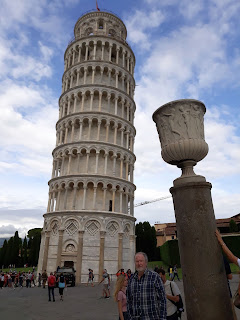 After a quick freshen-up, we were off to the leaning tower, which is only a few minutes walk away. The area around the tower and the accompanying duomo is very large with well kept lawns. There were plenty of people there, but little sense of crowding. Many people had the same idea of being photographed whilst supposedly holding up the tower. There was a festive atmosphere which made it very pleasant to be there.

We spent about an hour in this area then walked back to the hotel, looking for a suitable place to eat. Unfortunately, Italians like to eat meat (which is frequently pork or ham) along with cheese, which is not a suitable meal for us. We found a local pizzeria just outside the old city walls, where we ate spaghetti al pomadora and drank tea.

Thence to the hotel and bed. At the moment, I have not been able to connect my video camera to the computer, so I can't copy any of the footage which I shot today.
Posted by No'am Newman at 8:59 pm