For the past few months, I have thought that my second doctoral exam (aka IBR 2) would be held on Wednesday, 5 June. On the basis of this, we booked a flight on 6 June which would be the first stage in a two week holiday, which would culminate in the degree awarding ceremony in Edinburgh on 19 June.

Last night, I received an email from the university with an official invitation to the exam (these are sent two weeks before every exam). I was unable to open the PDF attachment at home because the document used some kind of extension which my alternate PDF reader (ie not Adobe Acrobat) could not read. So much for the P in PDF, which stands for 'portable'. So I sent the letter to my work email and read it this morning with Acrobat.

I have royally screwed up: it turns out that the exam will be held on 6 June at which time I will be in an airplane making its way to Barcelona! I quickly checked with our travel agent to see whether it would be possible to fly later on the same day or on the following day, but luck was not on my side. I also notified the university; I asked whether it would be possible to be examined personally whilst in Edinburgh, but again, no luck.

This means that I will only be able to take IBR 2 in December - at the same time (but hopefully not the same date) when I will be taking the IBR 3 exam. I hope that taking IBR 3 is not contingent upon passing IBR 2. So my doctoral studies are on hold for six months!

After performing part of the literature survey in April, I decided to put that activity on hold and turn my attention to passing the exam. Now that the opportunity to take the exam has been delayed, I may as well return my attention to preparing material for the doctorate itself. I think that I will spend the next few months preparing the research proposal: after all, I know how to write the proposal (IBR 1) and I have most of the necessary information. Using the downtime now will allow me to save time later on.
Posted by No'am Newman at 3:17 pm No comments:

I'm amazed at myself for mentioning John Le Carré whilst writing about Tom Clancy: there is a world of difference between them and Clancy is no match for Le Carré as a writer. The book which I was writing about, Clancy's "Red Rabbit", was a cold war story primarily about a Russian KGB agent who decided to defect (so far, so good). The story was told in simple language and it was fairly clear from the beginning what was going to happen. I only mentioned Le Carré because some criticism had been leveled at Clancy because there was "no action" in his book (presumably as opposed to other books of his); there is frequently "no action" in Le Carré's work either, but I know whose books I prefer to read.

Le Carré writes beautiful prose and it was a joy simply to read the opening page of his latest book, "A delicate truth", which I read over the weekend.

Continuing the author's penchant for finding new locations for his work, this one is initially set in Gibraltar before moving to the more familiar locations of Cornwall and London. As frequently happens with Le Carré, I had very little idea of where the book was heading until it was almost finished, meaning that I'll have to read it again shortly in order to improve my understanding.

In common with some of his later work, I suppose that this book is as much about whistle blowing as it is about anything else (like the lack of government oversight).

I don't want to write very much about the book yet because I didn't really understand it (obviously I understood the words, but I'm not sure what the author's intentions were) and I don't want to give away any of the plot
Posted by No'am Newman at 10:12 am No comments:

It took me only a few minutes to add a query showing the average number of apnea per weekday; the results were surprising. It turns out that there are 50% more apnea on Friday 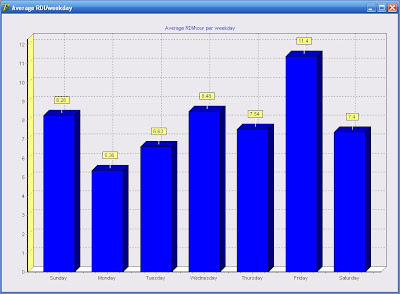 nights than on the rest of week. I am not totally surprised as we eat a meat meal on Friday evening and I probably go to bed at least an hour later on Fridays than on other days. I imagine that it's just by chance that Monday's have a low frequency of apnea.

To be honest, there haven't been that many data values to support any conclusion. That will have to wait for at least another month.
Posted by No'am Newman at 8:30 am No comments:

The SD card reader which I ordered a few weeks ago finally arrived. I was not surprised when it didn't work with my home computer (probably because I haven't gotten around to installing SP3 on XP) but the reader did work with my mobile computer. I extracted the SD card from the CPAP machine then inserted it into the reader. There are three files stored on the card, of which only one interests me.

Although this file has the csv extension, internally it's not really a csv. A single line looks like this
Yesterday I didn't know what to do with this file but this morning I realised that it was probably a 'continental' csv file - the commas should be replaced by dots and the semicolons replaced by commas. Thus 8,9 is probably the continental representation of 8.9. Once I had this straight in my mind, I could understand the structure. Fortunately the data in the file has fixed positions within reason (the dates are left justified as opposed to right justified which would be easier to read) making the parse not too difficult. The above structure would have problems with someone who has more than 99.9 apnea per hour (such a person would have extremely serious sleep apnea; I had 60 per hour before starting treatment).


The above line shows the data stored for 04/04/2013, which was the first night that I slept with this machine. I slept (or at least, had the machine turned on) for 498 minutes (8 hours, 18 minutes), 0 minutes with the humidifier (not surprising as there is no humidifier attached), 9.1 apnea per hour of which 0.2 were obstructive apnea and 8.9 central apnea. The pressure was 7 psi and there was no leakage (this occurs when the mask does not fit one's face properly).

I wrote a program in Delphi to store the data in an SQL database so that I can query it as much as I want and however I want. At the moment, I've only written a query to display the average number of apnea/hour on a weekly basis - after the first week, the average is about 7 per hour (very good). I think I'll write another query which will show the average number of apnea/hour per weekday - I wonder if there is a difference between workdays and Friday.

To give an example of what I look like when connected to the CPAP machine, I have downloaded and cropped a picture from the machine's vendor. Obviously it's not my wife and I in the picture (and anyway, she sleeps on my left).

One gets what one pays for

On Friday, I casually mentioned to the Occupational Psychologist that I had discovered a website that sells gadgets cheaply (she's a gadget freak). "Oh, you mean Deal Extreme? [DX]", she asked. "I buy lots of stuff from there, like phone covers and protectors. It takes a while for the orders to arrive but it's worth it. And the shipping is free".

I mentioned a few weeks ago that I had ordered an SD memory card reader (I may not have mentioned that I ordered it from DX). Whilst the card reader has yet to arrive, another order which I made from DX did arrive on Thursday: a set of wireless headphones and a solar powered butterfly.

I took the headphones home, plugged the broadcasting unit into our stereo and played a cd. This time, I was unable whatsoever to hear any music via the headphones, although again I was able to hear FM radio.

I get the feeling that the broadcasting unit doesn't work properly; as this was the whole point of buying the set, it means that the set does not do its job correctly. On the other hand, my wife may appropriate the headphones so that she can listen to the radio....

I consoled myself by the fact that the set cost only $15 (with no shipping costs) so I wasn't exactly out of pocket by very much.

I bought a few years ago a pair of solar lit birds - these are bird shaped lumps of plastic with a little bulb inside which is powered by solar radiation. The birds are 'perched' on a long stick of plastic which is planted in one of the flower boxes on the balcony (in fact, I think that one of them appeared in one picture which I placed here). During the day, the solar batteries charge, and at dusk the birds 'light up' - it looks very nice. So I bought a solar powered butterfly from DX thinking that it was the same thing - only much cheaper. 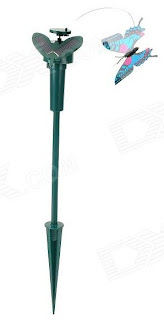 I connected the parts and placed the butterfly in a flower box. Yesterday was very hot with plenty of sun so I imagined that the battery would be fully charged. Come dusk, the birds light up but the butterfly stayed mute. We looked at the box in which the butterfly came and saw that it could be powered both by solar means and by a normal AAA battery, so we took the plastic stand apart and inserted the battery. When we turned it on, the butterfly did not light up as I had expected, but instead starting flying around its stand.

In other words, with respect to both products, one gets what one pays for.

I think that in the future I am going to order items from DX which do not require a battery, such as the SD card reader or nail scissors. There is little that can go wrong with a pair of scissors!
Posted by No'am Newman at 10:05 am No comments: