In true British style, I suppose that I should start with the weather: this allowed me to use such adjectives as 'torrid' and 'oppressive'. Friday morning started hot, and by about 3 pm, the temperature outside was 40°C. The air conditioner in the lounge was barely coping to keep inside to around 30°C, a condition that was severely challenged when I began cooking. Steam from the tomato sauce that I was making caused the temperature to rise in the kitchen. At one stage I turned on another air conditioner in the house in the hope that this would help, but it didn't; not only that, when I turned on the electric cooker, the main fuse blew! So I turned the second a/c off then restored power. Somehow we got through the evening although it was very hot. Saturday was very slightly better but still hardly bareable. Now it's Sunday morning and I'm at work with an air conditioner at my back so at least now I'm comfortable. 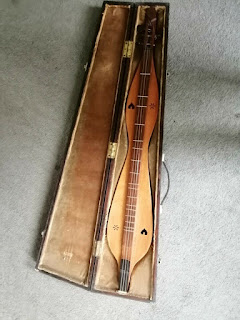 I had hoped to write that I was expanding my collection of musical instruments. I saw on Ebay that someone was offering for auction a dulcimer, along with case: there was one other bid at around £20 which would be a ridiculously low price. I entered a maximum bid of £30, and until one minute before the auction closed, it seemed that I would win the dulcimer for £27. To my surprise, dismay and disappointment, new bidders swooped in at the final minute of the auction and someone bought it for £45. Still a steal. I was disappointed for a few minutes but not for longer.

I installed a copy of Delphi 10.2 on my mobile computer which has been behaving better since I replaced its battery a week ago. The main advantage for me of using a modern version of Delphi is seamless unicode; so far, everything that I have seen is worse than Delphi 7. When compiling, there is a whirlwind of windows opening, resizing and closing which is annoying but has no affect on the final result.


I ported one of the exams that I had programmed for the OP: this one has a fairly simple interface but can display in four different languages, namely Hebrew, English, French and Russian. I 'shot myself in the foot' somewhat by choosing to port the version that displays unicode by virtue of the TNT components; these don't exist in Delphi 10, so my forms became devoid of controls. I eased the pain by using an earlier version of the exam. I found myself adding a certain amount of code controlling the position of the controls - Hebrew is read and written right to left, so labels have to be on the right, etc. Different fonts are required as well. The end result is a program that works like the original, only that it's 10 times larger. I didn't really gain anything from this.


Then I thought I would try to port the program that maintains the database for this exam. I wasn't expecting any of the earlier interface problems: the main problem would be the database driver. I was pleased to see that Delphi 10 has the dbExpress components so I didn't need to change these - that would be an arduous task - but I haven't succeeded yet in connecting the program to its database when it is running. At design time I did manage to connect one query: the output is unreadable. I'm going to continue working and reading about this: I need the correct 'database driver' for Firebird 2. Ironically my low level database manager works fine, but it's written with Delphi 7.

I wrote about some of these topics two years ago; last time I didn't have the database components so I couldn't do anything in that area. Now I have them but I still can't do anything with them.
Posted by No'am Newman at 9:07 am No comments: 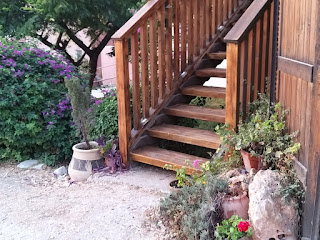 It has become normal for couples a few hours prior to their wedding to have a 'photo shoot' in some scenic location. We've discovered that an enterprising photographer has been using the steps at the back of our house as a location for these wedding photos.

I don't think that there's anything remarkable about these stairs and the accompanying foliage (which can't be seen too well in the photo), but maybe it's sufficiently exotic for the photographer.

I should mention that neither the photographer nor the couples come from the kibbutz which might explain why they've chosen our stairs: when one enters the kibbutz and travels around the 'outside road', the view isn't particularly pretty. If one considers the road to traverse a rectangle, then the entrance is at the bottom right hand corner and we are in the top left hand corner: we're the second house from the corner. It might well be that the photographer entered the kibbutz, turned right at the entrance (I think that these days there isn't much of an option to turn left as this leads to a building site), started driving around the road and stopped at the first location which took his fancy.

Whilst I don't think that we should charge the photographer for the use of the stairs, it might have been prudent from his point of view to ask permission. The thought that people have their wedding photos taken on our steps amuses us somewhat.

It's hard to believe but we're already in September - time seems to fly. I'm more aware of this than most, as my early morning walk (at 5:30 am) now starts in almost darkness, and the evening walk is also partially in darkness. We're fast approaching the vernal equinox, so this isn't too surprising. Saturday swimming - for the few Saturdays left before the season closes - will start now at 9 am.
Posted by No'am Newman at 8:53 am No comments: