My last minimal blog entry from Friday concluded with these words: I woke up yesterday with an aching throat; now I've got a cold, the likes of which I haven't had for a few years. On Saturday, I didn't feel any better and spent most of the day in bed. On Sunday, I went to the clinic for a throat swab, as my primary problem was pain whilst swallowing (dysphagia) along with the copious production of mucus. I stayed at home on Sunday and Monday, and by early afternoon I was beginning to feel better - especially my throat wasn't hurting as much.

But then I developed a headache and a fever and began to feel much worse: less mucus, much more coughing. Yesterday (Tuesday) I went again to the clinic and was surprised when I was ushered into the doctor's office without waiting and without an appointment. This doctor - a locum - listened to my presentation, examined me and then sent me to the neighbouring town for a chest x-ray. As my wife wasn't around, this meant that I had to saddle up the motorbike in order to get to the x-ray clinic. Fortunately, this is situated next to the railway station, which is very close to where I live.

After a few minutes waiting, I had two x-rays taken, then was sent back to my doctor. She was able to look at the pictures immediately (this is fine progress!) and was able to see that I had pneumonia. She gave me a prescription for antibiotics and for a mucolytic agent, saying that the (kibbutz) clinic had the antibiotic.

As it happened, there was a kibbutz member who had seen the doctor just before me; he too had been diagnosed with pneumonia and had been prescribed the same antibiotic. The nurse was dispensing him the antibiotic when we realised that the clinic had only enough for him; I did not fancy going back to town to the dispensary (I was very weak at this point). The member was very kind and suggested that he take one of the two packages of antibiotic whereas I would get the second package; I would return the package (or equivalent) when my wife sets the prescription filled. Since then I've taken three doses of antibiotic.

Looking at the previous time when I had pneumonia (almost exactly five years ago), the story is almost the same. Then I was diagnosed on the basis of the physical exam (a rattle in my lungs) whereas this time it was on the basis of the x-ray. I don't think that I am as weak now as I was then, but I am having difficulty in concentrating on anything that requires mental effort (writing this blog was difficult at times). People at work send me letters (to the internal mail server), seemingly unaware of my incapability; I haven't answered many. My phone is on 'quiet': I've noticed that a few people have tried calling but of course I did not reply. I communicate mainly by WhatsApp which is just as well as I can barely make a sound with my voice.
Posted by No'am Newman at 9:03 am No comments: 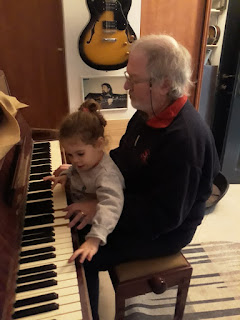 Yesterday was the first time I've seen my elder grand-daughter for some time, so of course we had to play a little piano together. I tried to explain to her the terms glissando and staccato (and of course, legato); whilst she understood staccato, the glissando was beyond her. Not surprising really: it requires quite a bit of strength to press the keys properly.

I woke up yesterday with an aching throat; now I've got a cold, the likes of which I haven't had for a few years. This means I'll be keeping my distance from the grandchildren tonight.
Posted by No'am Newman at 6:40 pm No comments:

I can't sleep without CPAP

On Thursday evening at around 9pm, the power went out. Shortly afterwards we received a message on our mobile phones saying that the electricity company was working in the area and had caused the power cut, which was expected to last two hours. Like everyone else, we went to bed early.

There are three factors which help me sleep well: being relaxed (normally due to a hot shower just before going to bed), having a warm bed (an electric blanket in the winter) and my CPAP machine. It also helps to be tired. On Thursday I had none of the three factors and so I slept badly; I had great difficulty in falling asleep and when I did, the sleep quality was not good. It didn't help that my right nostril has a propensity to close at night; CPAP keeps it slightly open.

I got up at around 1am and sat in the lounge with my mobile computer and personal internet router in order to connect to work in order to check something. I stayed up until around 1:30am; before returning to bed, I checked the fuse box and also went outside to see whether the light on the landing worked. The electricity had yet to return.

Back in bed, I managed to sleep somehow until my phone alarm rang at 6am. Still no electricity. After taking the dog for a walk, I noticed that there were lights on in other buildings. I checked the fuse box again and saw that the circuit breaker was off; once I raised it, all the devices in our house started working. There were several beeps as devices announced their return to life; the lights came on as did the air conditioner.

As far as I can remember, there hasn't been a night in the past ten and a half years when I haven't slept with the help of my CPAP machine. I have read that many people can't get used to it, but I can't get used to sleeping without it. Even in my darkest hours with pertussis (whooping cough), the CPAP machine kept me breathing - and just as well.

I was looking forward to a hot shower on Friday night before going to bed, but the water was only lukewarm. The electric blanket had warmed the bed so my body relaxed quickly. Of course, I was very tired so I fell asleep quickly. This morning we realised that the power cut had caused the timer on the water boiler to go out of sync which is why there was no hot water in the evening.

By asking other people, I established that the electricity returned at about 2:30am, much later than the electricity company said.
Posted by No'am Newman at 6:31 pm No comments:

Here are the top tags, again with few surprises

I'm in a very sombre mood at the moment: the shock of the funeral yesterday, the rain which has poured down almost without break since yesterday night, and the fact that the topic 'obituary' makes it into the top ten.

I found a few more pictures of Yair hiding in my mobile phone: this one is from four months ago, from our most recent 'company day'.

This morning, a colleague telephoned me to say that another colleague, the manager of the factory where we work, had died suddenly, and that the funeral would be today at 12:30pm. To say that I was surprised and shocked would be an understatement. This manager is not my manager, although we worked most of the time in the same building.

I was preparing mentally to give a eulogy at the funeral, but there were hundreds of people there (the deceased is one of seven brothers and two sisters), most of whom probably would want to speak, and also the man running the proceedings said that as it is Friday and some people have to travel long distances, there would be little time to prepare for the Sabbath, and so only the son and daughter would speak.

So I am going to write here what I might have said.... 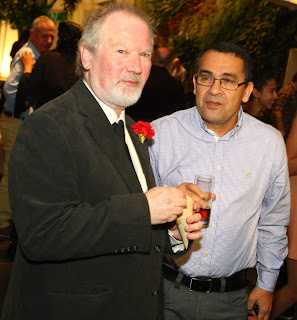 Just before leaving for this funeral, I heard about the death of a kibbutz member, MB. This man was the manager of Tzora Furniture who accepted me to work, 30 years ago. It is a sad coincidence that he died the same day as Yair, who has been the manager of TF for the past eight years. Yair and I used to speak most days, not only about work matters, but also about more personal topics. Despite the many differences between us, there are also many similarities: we're both near enough the same age (I'm slightly older).He has a son and daughter, I have a son and daughter. He was at my daughter's wedding, I was at his son's wedding. He had a grandson, I have a grand-daughter (in fact, two).

We often used to compare notes about our grandchildren; Yair's eyes would light up when he spoke about his grandson and about the joy which he brought to his life. Yair even told me that his grandson has a special 'kiddush cup' for Friday nights when the family sits around the table.

At this point, I would have dried up and possibly choked up; I don't have anything more to say except for the fact that I am still in shock and unable to process the news. I don't know what is going to happen come Sunday morning when the workers, almost all of whom were at the funeral and as stunned as I was, turn up.

The picture above shows Yair and myself captured at my daughter's wedding, nearly five years ago. It's not particularly flattering to either of us, but it's the only picture I have of my friend and colleague.
Posted by No'am Newman at 2:38 pm No comments: