I've been working hard on my doctoral research. As far as I am concerned, I have completed the pilot stage and I intend to send my 'intermediate submission' to the research committee. They are holding their next meeting on 15 September; as the material has to be submitted two weeks in advance, this means now. Their meetings are held once every seven weeks, so the next one will be at the beginning of November.

Whilst the material is ready, there is one glaring problem: so far, I have managed to receive consent forms from only six companies. This number is far too few and my supervisor warns that the committee will not pass my submission until this number is at least doubled.

Following is a question which I posted on Academia Stack Exchange, looking for help.
I am a doctoral candidate in Business Administration, researching the use of ERP (Enterprise Resource Planning) programs in companies. When I have explained my research to system administrators, the usual response is that it is an interesting subject. Despite the use of social media such as LinkedIn, a user group forum and direct mailing system administrators, very few companies have consented to participate in the research.

The research will be implemented via user questionnaires. In my opinion, very little time is actually required to complete the questionnaire (obviously I'm biased) and point out in the covering letter about the research that completing the questionnaire requires only about ten minutes. Of those companies who bothered to reply, almost all have stated that participating would require too much time.

Does anyone have any suggestions how I might encourage companies to participate? I know that basically I am asking them for something and not giving anything back in return.

One answer was posted:

From what you've described, you haven't done much, if anything, to provide a compelling argument for companies to participate in your research. Even though it doesn't, from your point of view, take much time or effort, it does take time and effort, both of which cost money.
If you're talking to a company that has 300 employees. You say it takes 10 minutes. Now multiply that by the number of participants and you have 3000 minutes or 50 person-hours. Then multiply that by the labor cost, say $80/hr (you have to consider the entire cost of the employee's time; salary, benefits AND the missed opportunity cost of NOT doing what something that would make the company money) that's $4000 for your 10 minute survey.
You need to think about what you can offer in return for their $4000 and sell it. Access to your findings? What would you offer them if you were asking for that much money to fund your research?

Whilst the calculations are a bit off in my case (I'd be only too pleased to have 300 respondents but they won't come from the same company, and the labour costs are somewhat less where I live), I agree with the sentiments. The problem is that I don't really have anything to offer.

I am going to approach two people for advice before I continue trying to sign up companies. One is a lecturer in ERP studies and the other is a fellow PhD candidate who is studying the implementation of IT systems in Israeli companies (fortunately we barely overlap). How did they persuade companies to help with their research?

One important statistic which I needed for the pilot study was Cronbach's alpha, which is a measure of internal consistency: how closely related a set of items are as a group. It took me a long time to find a site which explained how to calculate this statistic, but  eventually I struck gold. For most of my variables, I get good values for alpha - above 0.7. But for one variable, user training, the value is very low, about 0.31. At first, I thought that there was a mistake in the calculation, but after checking, I realised that this is not the problem, but rather each question is checking something different (frequency, quality and type) and there is no correlation between the answers. Technically, this means that I should separate each question and present it as a separate variable.
Posted by No'am Newman at 4:02 pm No comments:

What's been happening during August

After having been a fairly devoted blogger over the years, it might seem a bit strange that I haven't posted anything here this month. There are several reasons: the weather (two unbelievably hot weeks in which I could hardly function), work, research ... a variety of things. I didn't want to saturate my posts by remembering all my vinyl records; that can wait for another year. I'm going to write about some bits and pieces here, and save a more serious post for a separate entry. 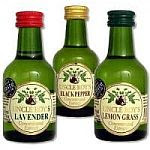 A few weeks ago I wrote about obtaining peppermint tea; encouraged by this, I decided that I would like to get some peppermint extract in order to improve my milk shakes. It took a while, but eventually I found a supplier - www.planetbake.co.uk - who both had the goods and was willing to supply to Israel. I ordered a small bottle of peppermint extract and one of banana essence; each cost 6.42 GBP including postage.

The package arrived yesterday and of course I had to try them out as soon as possible (but not together!). I'm not sure what the correct 'dosage' is; I tried one teaspoon to a glass and a half of milk. The results were somewhat underwhelming. It doesn't help that the bottles have a very small hole in the top through which the liquid emerges, making measuring a teaspoon-full difficult.

I'll try them both again in the future, although this time I'll use higher 'dosages'. One minor problem which affects me: the extracts are dissolved in alcohol to whose taste I am very sensitive. For me, more alcohol will make the results worse. I think that the extracts are designed for baking; the alcohol will evaporate in the heat. I'm using it in milk shakes, which are cold!

Searching for banana powder leads me here - they also have blackberry powder. I'll probably make my next order from them. Powder will be more suitable for a milkshake.

After a short drought on television, there have been a few films and programmes which I have enjoyed watching. The past few days have seen several films starring Mark Ruffalo being shown; some of these I've seen in the past, but there were two new (to me) films. For a long time, I didn't like this actor: there's something about the way that he speaks that annoys me. I've partially overcome that annoyance but I still find it hard to countenance his almost constant swearing.

"Begin again" (2013), on the other hand, is much more my cup of tea. Ruffalo is still swearing, but at least it's somewhat tempered here. This is a musical film by the director of 'Once', starring the until now non-musical Keira Knightley. I thoroughly enjoyed this, probably because the subject matter spoke closely to me.

The tenth - and final - series of "Spooks" is finally being shown here. Gripping and totally unpredictable, the only faults which I have with this is that high quality surveillance intelligence is available immediately and that people jump to the correct conclusions on very few facts, and they're almost always correct (except when they're being 'played'). This is television, after all, and the grey minions of John Le Carre would put us all to sleep if the series played out at its real pace. Whilst there is a series long arc (which has yet to be revealed to us in its entirety), there is also the 'crisis of the week', which I find somewhat tiring.
Posted by No'am Newman at 3:41 pm No comments:

Caveat: there is little reason to read this post if you don't use Priority!


As I may have written before, my company merged two Priority databases a few months ago. One result of this is that certain reports now work very slowly: this is because they have to create a temporary table containing parts. Once this table contained about 35,000 rows but now it contains around 900,000 rows! This means that counter-intuitively, reports will work faster if they are not passed a list of parts.

To be more accurate, the time that a report requires to operate can be divided into three:
It's stage one which can take a large amount of time. Today I discovered a method of  shortening this time, which I am going to describe here.

If there is a parameter requesting a range of part numbers, it seems that Priority first creates a temporary file, then it copies all the existing parts into that file so that the user may choose parts, then gets the user's input and then creates a second temporary file with the chosen parts (this step generally takes place in stage two as described above, under the programmer's control). Thus if there are 900K parts in the database and the user chooses all of them, 1.8M parts will be copied!

The way I achieved this was as follows. I wrote a multi-stage procedure in Priority:
At the beginning of stage 4, I entered the following lines:
The action resulting from above is that the processing stage will use either the chosen list of parts (the "linked table", in Priority speak) or all the parts; the number of parts is not particularly important to SQL, which is a set orientated language. The hack is the amount of time saved by not building (twice) the temporary list of parts.

For my reference, this tip is used in procedure GLOB_PART_MONTHS.