A brief tribute can be found here. No doubt more will be posted in the coming days (here's another, more detailed, tribute). 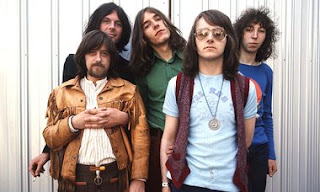 Swarb is the bearded guy in the front left; it's possible to see that he was comparatively older than the others. This picture was taken in 1970, when he would have been 29 whereas Simon (green shirt, middle) was only 19, although seemingly older than he actually was.

I was introduced to Swarb's music in early 1970, once again via the seminal 'All you can eat' album, although it would be a few months later with the purchase of 'Liege and Lief' that I really heard him play.

In retrospect, Swarb was fairly restrained on that record; he began to let loose on 'Full House', after which Richard (far right, blue shirt) left and Swarb remained as the main musical force in Fairport. He carried the flag for several more years until the deterioration in his hearing and the audience shift at the end of the 70s caused the band to dissolve for several years.

Despite appearing at several Cropredy festivals in the early 80s, he declined to play on the revival "Gladys' Leap" album, since when he has been a friend but not a member of Fairport.

When listening to those Fairport albums now, I quite enjoy them but wish that he had been less dominant as I don't necessarily care for the musical values which he propagated.

The only personal memory which I seem to have of Swarb is from Cropredy 1996. I found myself dozing during the mammoth Fairport set, and had to awake myself by saying "It's Swarb! You may never ever get the chance to hear him play again!" (of course, I did in 1997 and 1998, but never again. Mind you, I haven't seen any of them since 2004).

Now Swarb joins the Fairport alumni all-star band in the sky, along with Sandy, Trevor, Bruce and Martin. Strangely enough, the first three along with Swarb appeared together on "Rising for the moon" (1975). As far as I know, their fellow musicians on that album - Peggy, Jerry and DM - are still doing well.

[Update from several months later: that final paragraph was written some months before Jerry Donahue had a stroke]
Posted by No'am Newman at 3:59 pm