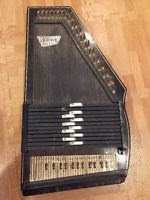 As of today, I am the owner of an Oscar Schmidt 36 String 12 Chord Vintage Autoharp, certainly the only one on my kibbutz and possibly the only one in Israel. I bought it from Ebay a few weeks ago and to be honest, buying it was a mistake. I had participated in several auctions for more modern autoharps, but I didn't win any.

This one was priced very low which is why I entered a bid. Shipping was available to Israel, which was not the case for about half of the 'harps offered for sale. A moment after entering the bid, I read the seller's comments: Seriously out of tune and needs TLC. Attic find (my own attic- used to play this when I was a kid). No structural issues that I can identify- just cleaning and tuning (and the two missing keys, which I unfortunately do not have). Had I been less frustrated about not winning any auctions and less excited by the fact that the item could ship to Israel, I would have read this prior to entering the bid and probably would not have bid. Silly me. At least I had enough sense to buy a tuning wrench (like a piano tuner's).

Both items arrived today, and it was with some trepidation that I opened the package. The 'harp survived the delivery although there were some extraneous bits of broken plastic in the package; I couldn't identify their source and it doesn't really matter as I couldn't do anything with them. As the package states, the 'harp is totally out of tune; some strings are three or four semitones sharp! So far, I've tuned about half of the strings. Obviously I haven't developed a feel for the tuning wrench yet; this needs a very delicate touch. A slight turn makes for a change of several semitones. But I'm getting there.

One of the 'two missing keys' (these are the white things on the lower half of the picture) was taped with sellotape to the 'harp; I've glued this into place. Hopefully I can find something for the other missing key, which is the closest to the bottom. More importantly, I have to figure out what chord that key plays.

The autoharp is like a folk guitar in that it plays mainly chords, but unlike a guitar (or a piano), when one presses on a chord bar, the strings on which the bar presses are muted; one hears the unmuted strings. It probably won't be very difficult to get to a simple standard of playing but I doubt that I'm going to get very far. The quality of the instrument doesn't help.

Having discovered this,  I realised that I had glued the key onto the wrong bar (the key says G but I had placed it on the Bb bar). Fortunately, the glue had not set, so I was able to pull the key off and glue it in the correct place. These chords allow one to play in the keys of C, D, F, G and E; four or five chords in each key. It's a shame about the G7 and C7 chords: these are effectively the same as G and C so the bars could be put to better use for other chords. This site (and others) imply that one can recut the felt on a chord bar in order to create new chords, but that's way above my ability. There aren't going to be many of my songs which I'll be able to play, but most traditional songs and those in the tradition should be ok.