I read Randall Bolten's latest blog entry, "Did you spell '273' correctly?" with interest. The issues mentioned in his blog are not the sort of thing which affect me, even though the other day I found a long-standing spelling mistake in my thesis (I also found one on this blog, where I had used a homonym for the word I wanted). I'm writing the thesis with Word, which has a spell checker, so most mistakes should be caught. Unfortunately, Word uses American spelling whereas I use British spelling; supposedly I have 'told' Word to use British spellings but it consistently ignores me. So all the time I get squiggly red lines under words such as 'organisation' and similar.

I continued trying to find suitable material which will help me phrase the data analysis portion of the submission. This section - less than a page long - is proving to be a field of thorns for me and seems to be causing my supervisor - who is a statistician - a great deal of frustration. I have been dreaming about this section for the last few days, which shows how deeply it is affecting me; I still cannot find suitable language.

Something which may help is a paper from Trinity Washington University which gives a sample of a quantitative research proposal.  There doesn't seem to be much material about statistics there but there are a few pages on creating a model of the theoretical framework, which looks like this: 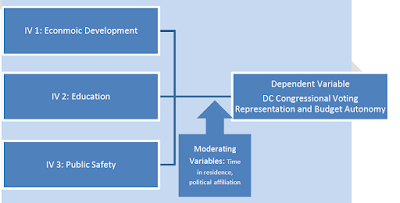 I will try and create a similar model for my research, which makes me wonder whether what I have termed 'company variables' are not independent variables but rather moderating variables. It could easily be argued that a user might have certain values for some of the independent variables, but these are moderated by the company variables. On the other hand, examples of moderating variables in the Trinity example are 'time in residence' and 'political affiliation'; translated to my research, 'time in residence' could be 'age' or 'years of experience with ERP'. I think that I will ask my supervisor about this - maybe I will get a useful answer.

According to 'Ask Yahoo' (definitely an accredited source of information), the best answer says that:
In general experiment design, you might typically think of a moderating variable as an independent variable, as it is often something the experimenter will manipulate. Its more useful to think of it in terms of causal relationships between the variables, and think of independent variables as those which you think will have a *direct* effect. A moderator variable specifies *when* a predicting variable will have an effect. Say I want to look at the effect of caffeine on memory for example, and I predict that increased caffeine consumption will improve memory performance. In my design, I have a caffeine vs no caffeine condition and male vs female as my independent variables, and memory test performance as my dependent variable. My results show that there is an interaction between sex and caffeine, with males doing better after consuming it, but it making no difference for females. We would call sex a moderating variable in this instance; whilst it doesn't predict memory performance itself, it determines when my predictor (caffeine) will have an effect (only when it is males). Moderation effects are generally demonstrated by significant interaction effects in your analysis.

On that basis, 'gender' and 'age' are definitely moderating variables in my research.

Thank you for sharing. I am currently on IBR2 and reading your blog really ignites excitement in me to keep pushing.