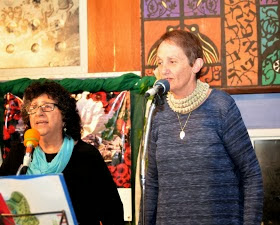 As for the other group of songs .... First off was the instrumental track which I prepared for what might be termed "the children's song". The two singers - both aged around 70, grandmothers and veteran kindergarten teachers - sang very well (even with snatches of harmony), but also sang too close to the microphones. As a result, my musical track was completely overwhelmed and barely heard. As opposed to the previous set of songs, this performance was indeed tight and I thought that it was very good. 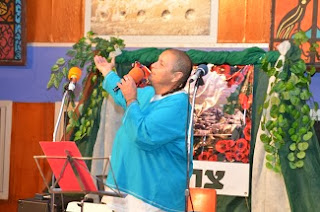 Then there was the song whose music I wrote for the singing lyricist (and whose vocal I recorded in advance and improved with technical devices). I attended a rehearsal of this song on Friday morning; one might ask how one can rehearse which has already been recorded - there is the small matter of staging. It turns out that the singer had worked out a repertoire of body movements and was prepared to perform the song as opposed to simply singing it (or miming, to be accurate). She was walking up and down the stage (the lyrics refer to walking along the paths of the kibbutz); as the stage microphones were on stands and obviously not moving, it would have been very obvious that she wasn't actually singing. The problem was solved by giving her a hand-held radio microphone, which wasn't connected to anything. The illusion was complete. Didn't anyone notice that there was no proximity effect, and that her vocal was perfectly balanced with the music?

As my voice can be heard during the chori (although mixed low), I thought it a good idea to appear on the stage out of nowhere to sing my part. Everyone thought that this was a good idea. I don't know whether my microphone was actually live during the performance, although people said that they couldn't really hear me. 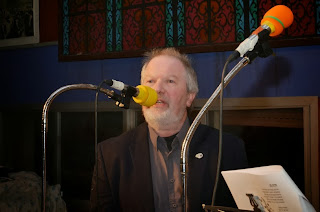 The producer and I decided that I would sit on a stool and 'sing' my solo song; had there been anyone working the lighting (as opposed to two general sets of lights which lit the stage), then there would have been a spotlight just on me. In order to add some form of movement, I decided to drum on my thighs; it probably reinforced the impression that I was counting in order to know when to sing each line. It occurs to me now that I was the only person who had the stage to himself.

People afterwards said that I sang very well and that they didn't know that I had such a good voice. No one (aside from those at the rehearsal on Friday morning) seems to have twigged to the fact that the vocal was pre-recorded. Did they not hear the harmony vocal? If so, where do they think that it came from? Anyway, people were very complimentary. The remark which touched me the most came from someone whom I very rarely see: "it's good to see you making a come-back after years of discrimination".

And now for the final song (which unfortunately was performed before my quiet song): this featured four good musicians (one is the teenage saxophonist who I mentioned in the first part of this review, and one is doing his army service in the IDF orchestra, meaning that he is very talented) along with one reasonable teenager, with the odd line up of tenor sax, alto sax, accordion, keyboard and drums.

They played a very raucous song in a style which I think is best described as 'jungle kleizmer' - a very strong 'jungle' beat along with the saxes playing a riff which seemed to be descended from a kleizmer tune. The lyrics were humourous and described the difficulty in getting from the local shopping centre (situated about two kilometres away) to the kibbutz, based no doubt on the tenor saxophonist's problems of getting home from the army.

Putting it simply, this song was completely different from everything else that evening; it was exceedingly well-played, it was both loose and tight, it was funny, it was long (not that anybody minded) and it was real music! Every other song was polite, whereas this song was a slice of Israel. It was clear from the beginning that this song stood head and shoulders above all the others and was clearly going to be the winner of the competition.

I greatly enjoyed these four songs, which seemed to be in a different class to the others (because of the arrangements and level of playing); they made the evening worthwhile.

I await the recording of the evening to both relive the excitement and also to verify my judgements.