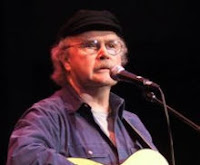 Like many other things, I became aware of him at a summer camp - I think it was in 1969. Someone introduced us to the song 'Lyndon Johnson told the nation' (or as we knew it, 'LBJ') which was a protest song about the Vietnam war. Probably the war meant very little to me as a 13 year old, and anyway LBJ was no longer president in July 1969. Even so, I was very struck by the song.

By chance, the first concert which I went to at Bristol's Colston Hall, around September/October 1969 was by Tom Paxton. I saw him again at the same location about six months later. I enjoyed the concerts, but he didn't play 'LBJ' (not really surprising, as by then the song had passed its "sell by" date). I also bought a double lp of Paxton and his small group (pianist and bassist) live in concert somewhere; some of the songs I recognised from the concerts which I had attended and some were new.

At some stage in those days, I wrote a letter and sent it (how?) to Tom Paxton. To my surprise, I received a very warm reply. Of course, I have no idea where that letter is now. It was sent from Long Island, which means that it was before Paxton, his wife and their two daughters lived in Holland Park, London for about four years in the early 1970s as per Wikipedia. After the double lp, Paxton dropped off my radar, which is rather sad considering how much closer he was to me geographically.

I came across his name again in a book about record producer Tony Visconti, in which Visconti talks about his "live plus" recording technique - recording someone performing live, when they are more relaxed, then adding and/or replacing parts.

I admit that it's been a very long time since I've given TP a thought; no doubt he was quickly replaced by Richard Thompson as a song writer to emulate. But I'm pleased to see that he's still with us.

Even to this day, I still sing to myself the couplet "Rained again last night/The streets are slowly drying" after evening rain - this comes from the Paxton song "The things I notice now".
Posted by No'am Newman at 12:38 pm