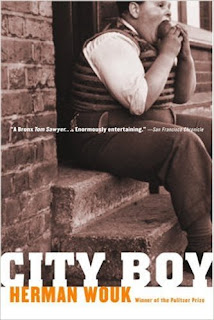 It happened twice during the years 1969-70 that I found abandoned library books on benches in my school rooms. One time, the book was "Tiger, tiger!" (aka "The stars my destination") by Alfred Bester, which was a stupendous find; this was one of the strongest and most colourful science fiction stories that I would ever read. I suspect that I had difficulty understanding the story at first, but later understood its intricacies.

The other book was "The city boy", by Herman Wouk (certain editions seem to have lost the definite article). Whilst obviously I was not living in 1922 (or thereabouts) in the Bronx, with a father owning a factory which made ice, I was aware on first reading of several similarities between the story's protagonist and myself: we were both plump Jewish boys who preferred intellectual pursuits than sports and we both went to summer camp - although mine lasted two weeks as opposed to Herbie's two months. It is no wonder, then, that this book spoke to me.

I haven't read it for at least twenty years (if not more), but recently found an ebook version which I loaded onto my Kindle. I read the book in its entirety yesterday and was once again charmed by this story which apparently was a failure when first published (although this may have been a backlash to the success of Wouk's previous novel, which was his first). Now, I find it amazing how Wouk understands and writes about the behaviour and motivations of an eleven year old.

The serendipity of finding these books abandoned in classrooms helped fuel my eclectic and scattered approach to reading in the formative years of my adolescence. It's a shame that I found only two books - who knows what a third might have been? By 1970, though, I was off and reading books which I found through books which I had already read.