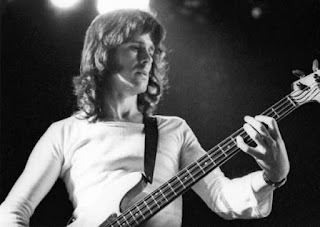 "Spinal Tap" notwithstanding (five drummers mysteriously die), it seems that being a bassist in a prog-rock group is a work hazard: I was sad to hear this morning that John Wetton, bassist in the 1972-4 configuration of King Crimson, died after a long battle with cancer. Wetton joins recently departed Greg Lake and long departed Boz Burrell in the King Crimson bassist casualty list (there are also two Van der Graaf Generator bassists to keep them company).

Wetton had been in a variety of groups before King Crimson, most notably Family; he sings second vocal to Roger Chapman on one my favourite Family songs, "My friend, the sun". In KC, he played bass, sang, wrote songs and played uncredited instruments, his apotheosis being "Starless".

After KC, he went on to play with Bill Bruford in UK, then hit the big time with Asia (I have no acquaintance with them). Apparently, he was an active musician until the last few years, when the cancer came.

Tonight, as a tribute, once more I will float down the river of music that is entitled "Starless" and enjoy his bass and voice.

Edit from the same evening: listening to the radio today, I heard the announcer mention the death of JW, and in tribute played a live version of 'Book of Saturday'. I didn't recognise this version - it may not have been by KC.

Fripp writes:
John was a pal over almost forty-two years, beginning at Bournemouth College in 1965, two teenage students and local gigsters. We continued in touch during our early professional lives in London, speaking from time to time, before John joined King Crimson in 1972-74 with David Cross, Jamie Muir and Billy B. JW was, for me, the leading bass player of his generation, a player of international class, before John moved increasingly to the front as singer and songwriter: Asia’s debut album was the world’s biggest seller in 1982. We continued as chums, working together when John lived in LA in 1992; and increasingly met for coffee and cakes after John moved back to Bournemouth in the Noughties.

Edit from a month later: I found this article (it's more like a book chapter!) about John, mainly before he became famous.
Posted by No'am Newman at 6:43 am