Over the past few months, I've been ordering various items from I-Herb; this started with theanine, moved on to magnesium supplements, through herbal teas and mint chocolate and onto peanut butter and almond biscuits. The peanut butter is fine but I was a bit disappointed in the almond biscuits: these are cut very thin and they're very brittle. I was expecting something else.

A few days ago, I was in our company's offices in Tel Aviv and helped myself to a biscuit - very similar to the almond biscuits (aka biscotti) that I had bought, only these were softer (more chewy). When I asked where they came from, I was told the name of a bakery. A day later, the penny dropped: I could probably bake some myself and in doing so, achieve the consistency and size which I would like. I should point out at this stage that apart from a short period when I was in the army and used to bake myself a cake which I would take with me when I stayed over weekends, I don't bake. I don't like the fussiness of having to follow a recipe exactly.

So yesterday I researched recipes; there are plenty on the Internet so I could choose the most suitable. I ignored all those that use butter - so that we could eat the biscotti after meat. Then I thought that it would be caring if I could find a recipe which doesn't use any animal product, such as eggs, so that my vegan daughter could eat them. Here is the recipe on which I based my biscotti (I love the ignorance of calling them 'biscottis' - biscotti is the plural of biscotto, in the same way that panini is the plural of panino. It seems that the biscotti recipe is open to mild alterations in the flavouring.

This morning I bought applesauce and slivered almonds; the rest of the ingredients we have at home. I added to the list of ingredients a little blackcurrant jam which was left over in the fridge, along with fresh blackcurrants and goji berries. Mixing the ingredients was fairly easy until I added the wet items (sugar, applesauce, oil, berries, almonds) to the flour; this mixture got progressively harder to mix. Eventually I dumped the entire mess onto a baking tray covered with parchment, and tried to shape it into a 'log' as per the instructions.

I then put the tray in the oven for 25 minutes at 175C as instructed, before taking it out in order to allow the 'log' to cool. Here is a picture of the result (I had already started cutting it before remembering that I should take a picture). 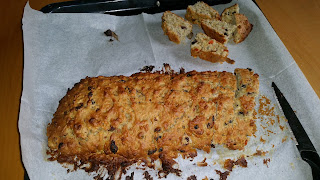 An alternative name for what I was baking is mandelbrot - Almond Bread in German (also the name of the computer scientist who discovered fractals, Benoit Mandelbrot - and indeed, it does look like a loaf of bread at this stage. But the name is biscotti which means 'cooked twice' (like biscuits), so I chopped the loaf into small pieces; in my opinion, I should have spread the loaf out more so that it would have been less high and would have baked a bit better. I then put the tray back in the oven for another ten minutes at 150C, which finished the baking; cutting the loaf in this manner (and turning the pieces through 90 degrees) allows slices taken from the thickest and central part of the loaf to cook properly.

Here is the final result - they look quite different from the commercial versions, each slice being much larger and probably containing slightly less fruit than I had intended. 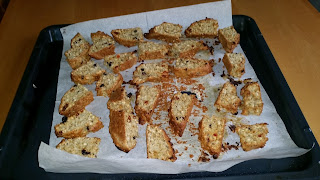 My wife had a slice and gave her approval, which means that I'll be baking this every now and then. I hope that my daughter likes this too.Next time, I will add more blackcurrants and/or goji berries, and I'll try and reduce the thickness of the 'log' before baking, probably with a rolling pin.
Posted by No'am Newman at 4:53 pm