When I bought my mobile computer six months ago, I stated that one of the reasons for doing so was to transfer all my Delphi development work to this computer; this would allow me to take the computer with me on Friday mornings when I work face to face with the Occupational Psychologist so that simple program fixes can be programmed on the spot.

Unfortunately, that plan didn't work out as I had great difficulty in installing Delphi, and when I did manage to cross that hurdle, I discovered that all source code which uses Hebrew has been mangled (rather, the Hebrew has been mangled; the code itself is ok). Since then, I have not given any thought to the 'Delphi Hebrew' problem and have used the mobile computer for tasks such as creating videos, writing my doctoral thesis and recording vocals for my songs.

This morning, when walking the dog, a thought popped into my mind, completely out of the blue: maybe I could create a virtual XP machine on my computer and run Delphi "as was" in that virtual machine. This was rather a strange thought as the subject hasn't crossed my mind in nearly six months, but prophetically true. I used this web page as a guide, which was more than enough to get me started.

At first I downloaded the professional version of VMWare, but quickly corrected my mistake and downloaded the free version, VMWare Player. While this was downloading and installing, I looked for an installation disk for XP. I used to have this on a thumb drive, but apparently deleted it at some stage. To my pleasure, I discovered a bootable cd in a drawer, so I was set. I forgot how long it took to install XP! Once the operating system was installed, I could open the virtual machine and run XP. I then wasted some time installing Delphi and various components: it would have been better to wait until I saw that my programs ran properly in this virtual machine.

Eventually I started testing some of my programs; I had to install Hebrew as a language as well as defining it as the program for non-Unicode programs. After this, my programs ran but did not display Hebrew; either I had missed a reset or else there was an extra definition to be made in the control panel. So after changing something, I rebooted the virtual machine and finally my programs displayed properly. I haven't tried compiling anything yet - that will be a different can of worms - but at least I know that the groundwork has been laid.

Transferring files from Win 8 to XP is a bit strange (one has to use the 'unity' option) but works; copying files in the opposite direction (XP to Win8) is a simple matter of copying the files in the virtual machine then pasting them into Win8. This means that backing up files to Mega will not be a problem.

Here are screenshots of the control panel's regional and language options, in case I have to do this again (and it's good to know that I can use the Windows 8 snipping tool to get screenshots of part of the XP screen) 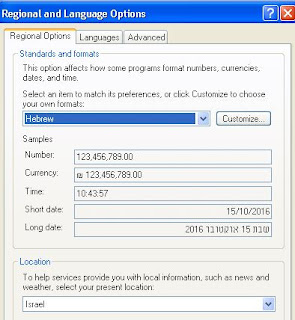 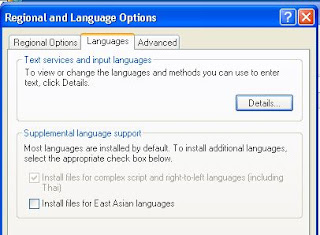 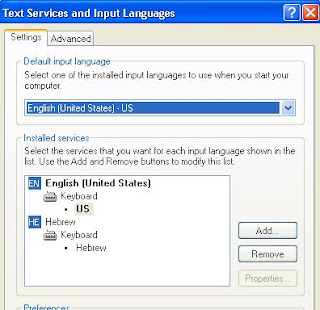 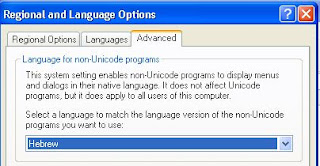