DBA: Entering the final third of the doctorate

Unfortunately, my thesis supervisor went on holiday for two weeks immediately after the last research committee meeting, so I wasn't able to talk with him about the submission feedback until yesterday. I expressed my feelings about the feedback which he understood; the supervisor was also able to set my mind at rest on a couple of points. Firstly, it transpires that one of the reviewers has an IT background whereas one doesn't, which explains why one reviewer was more understanding than the other. Secondly - and more important: the feedback will have no effect whatsoever on the judging of the final thesis; this is dependent solely on the internal examiner, the external examiner and the viva.


We discussed certain points about the feedback, primarily the need for expanding the methodology section. Since receiving the feedback, I had written a few pages about research paradigms and similar matters; most of what I had written was accepted by my supervisor, but I still have to add material as to why I am using the methodology which I have chosen. This shouldn't be too difficult to write. My supervisor also notes that I have to write about the differences between deductive and inductive theories.


In order to address some of the issues raised by the non-IT reviewer, I wrote a new opening page for the thesis which begins with the statement "If information is the life blood of the modern organisation". Normally I would have considered ERP programs to be the nerve centre of the organisation, but apart from showing my bias, it also creates a mixed metaphor. Thus I concluded the opening sentence thus "then ERP programs can be considered to be the vascular system". 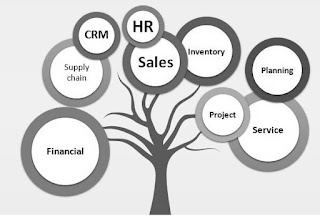 I spent some time trying to introduce a graphic representation of an ERP system; whilst I found one eye-catching graphic on some company's web site, I decided not to use it as the graphic is in colour and would probably look bad in black and white. I found a PowerPoint template which enabled me to create a similar graphic which I then pasted into the thesis. In the evening, I considered how to overcome the problem posed by the non-IT reviewer: I need someone to read the thesis who is an academic, understands English but is not IT-orientated; this way, hopefully I will be able to get more useful feedback on what isn't clear. There are a few suitable people on the kibbutz who I can approach.

Due to the holiday season, I won't be able to start the active research until November, so I intend to use the time until then to fill in the gaps which the review pointed out.