A few weeks ago I had the misfortune to return from Haifa on a very noisy train. It's interesting to note that in the mornings, the trains are generally quiet, but in the afternoon, people lose their restraint and make a large amount of noise - generally from smartphones which are not listened to via headphones. Although in the past I had traveled with a small mp3 player, my headphones are fairly small, albeit of high quality. So even if I were listening to my music, I would also hear all the extraneous noise.

After that trip, I decided that something had to be done. I had seen people traveling wearing headphones which enclosed their ears (the type that I like) but these phones weren't connected to anything. I wondered whether they worked via a bluetooth connection to a smartphone. When I got home, I started looking for something like this on the Internet. Whilst I did find bluetooth headphones, I found something (for my purposes) much better: headphones with a built-in mp3 player. What could be simpler? 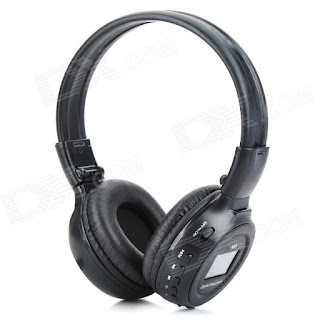 I quickly found the N65 Sports Wireless 1.5" LCD Digital Headphones MP3 Player, although now I don't know from whom I ordered it - apparently not Deal Extreme (dx). The headphones come with a Lithium Ion battery but without a memory card. As it happens, I had a memory card waiting in my shopping cart (which probably means that I ordered from Amazon), so I could copy my songs to the new card and insert the card into the headphones.

I utilised that time to copy songs to the memory card, which is a whopping 16GB. I hate to think how long it will take to listen to all the songs - and it's not even half full. Once the battery was charged, I listened for a few minutes to the music - very good quality. My wife also had a listen and she immediately wanted a pair for herself. Unfortunately, it seems that this product was so successful that at the moment one can't order it from anywhere.

The price was a ridiculously cheap 80 NIS - but when one takes into account that one has to buy a memory card, the price becomes a more reasonable 150 NIS (or thereabouts). I see that someone is selling from eBay for $12.41 with free shipping.

The headphones arrived on Sunday; on Monday I had the chance to test them in the field as I was traveling to Haifa that day. I wore the phones from Tel Aviv to Haifa going north, and all the way coming home. Although I could hear muffled train announcements when music was playing, the only time I could hear other people on the train was during the gaps between songs (I should point out that I don't listen at a very high level).

The only gripe which I have at the moment with the player is that the songs play in what seems to be alphabetical order. For reasons which are not clear, the music started with my Richard Thompson collection, the first song being "Al Bowlly's  in heaven". After that, there were a few songs whose name begins with "B", then "C", etc. By the time the songs had got to the "W"s (eg "Walking on a wire"), I noticed that several songs had been skipped. What happened next is not clear: I think that Al Bowlly started again, then I pressed the button which skips to the next track. I was then treated to all the songs that hadn't been played the first time, again in alphabetical order. Strange.

As I have included so many RT songs, he was still playing when I got off the train. When his run finally finished, the player moved to songs by Robin Frederick (alphabetical order again?), again playing the songs in alphabetical order. Being scientific, I have to state that I haven't collected enough data to make a conclusion about the order. I did try numbering the songs - both in the file's name itself (eg "4123 Walking on a wire") and also in the internal metadata of the mp3 files (the ID3V2 tag). Neither seem to make any impression.

After Robin, Sandy Denny popped up, thus continuing the alphabetical order of directories. Her songs have followed the ID3V2 tag and have not been played in alphabetical order. Strange. I shall have to wait and see what happens next.

I did look for an instruction manual on the internet - I found something in Chinese English, half of which is incomprehensible. Needless to say, the issue of song ordering was not addressed. Searching for this item reveals about 38,700 results. Obviously I'm not going check all of them; from what I can see, at least the first couple of hundred hits reveal exactly the same text. No one seems to have actually reviewed this item.

I should point out that I am one of those dinosaur types who likes their songs to be played in a definite order and not at random. An order would allow me to appreciate the changes in RT's songwriting, playing and production over a 40 year career.
Posted by No'am Newman at 8:30 am