The latest addition to our musical menagerie ... and peppermint food

For reasons which escape me, my wife has long wanted a piano in our house. It's not as if she can play .... Anyway, her brother heard of someone who wanted to get rid of their piano so my wife became interested. We didn't have to pay for the piano, only for its removal - 600 NIS (about $180).

It's a Czech August Förster - there isn't much about this make of piano on the internet, apart from this exchange. The piano looks in good condition, but after checking the keys, I can see that it hasn't been played for quite a while, as several keys are out of tune, whereas one key (F3) resonates for a long time after being struck. We shall have to call in the local piano tuner, whoever he is, for a session. 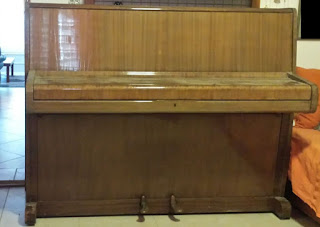 I was pleased that the piano didn't take up too much room. The piano joins its brothers and sisters - guitars, bagpipes, violin, melodica, electric keyboard and Irish whistle - and maybe one day we'll make some music with it.

I paid a visit to the local branch of the Italian ice cream chain that I mentioned a few weeks ago. I was disappointed to see that they had no mint ice cream; in fact, the selection was somewhat smaller than the one near the hospital. When I mentioned this to the staff, I was told that this is because they are a smaller branch. 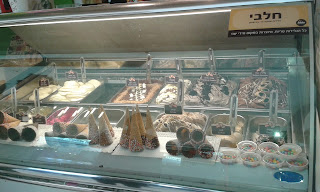 The sticker on the right hand side of the freezer says "Milk ice cream, 4-8% fat. All the ice cream is fresh, prepared daily on the premises". When asked about the mint ice cream, it seems that if I phone a few days in advance, they will prepare me a 1kg package. As I have only eaten about half of what I bought a month ago (the weather hasn't been suitable lately for eating ice cream), I don't know when this is going to be.

Another package of peppermint tea arrived today. The first shipment took quite a while to arrive so I thought to order in advance. I'm convinced that the second shipment took less time. I haven't been drinking peppermint tea very much lately, preferring to drink green tea, stinging nettle tea and ordinary breakfast tea.

Near where I sometimes work in Tel Aviv is a shop which sells spices, hard to obtain specialist foods and kitchen equipment. I think that they're very expensive, but they do sell items which one can't obtain anywhere else. They don't sell peppermint tea or peppermint extract, but I noticed the other day that they sell peppermint cordial. I went to buy a bottle of blackcurrant cordial, and the peppermint was standing next to it. These are imported from France and cost about three times as much as normal cordial (ie fruit concentrate) costs.
Posted by No'am Newman at 1:48 pm