Breakfast in our Palermo hotel was so-so; it was ok, but definitely ranked in third place. It also started at 7:30am as opposed to 7, allowing me to sleep later. The breakfast room is fairly small and reviews suggested to get in early - sound advice. 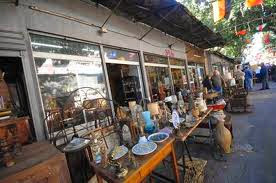 Once out of the hotel, we made a beeline for the Piazza Castelnuovo in time for the first (9:30am) hop on, hop off, bus around Palermo. The plan was to enjoy the tour, then get off at the Cathedral stop so that we could walk to Mercata delle Pulci, an antiques market. The weather was bearable when we started the tour, but already at 10am, the heat was getting to us.

Mercata delle Pulci is a short road with shops/stalls on both sides of the road, selling the sort of item which my wife loves. Plates, pots, kitchen utensils, clocks, furniture, candelabra - all at least fifty if not a hundred or a hundred and fifty years old. In the first shop, I found a small accordion like the one being played by the boy on the way to Pompeii; I was seriously considering buying the object, but when I tried to play, it seemed as if the reeds were broken. I don't know exactly how we would have got it into our luggage anyway.

I went off to read for an hour while my wife continued poking around. In the end, she bought three small objects (I haven't actually seen what she bought), each costing about 5 euros. One wonders how she managed to bargain with the shop owners as none of them seemed to understand English (presumably they showed amounts by their fingers). One also wonders how the shop owners make a living as we were the only clients there for an hour. 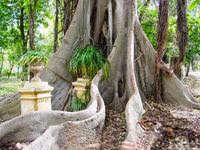 By the time we had finished, the air was stifling, so we walked back to the main road, had an ice cream then waited for a few minutes, when fortunately the bus came around again. We continued on the bus until we came back to the botanical gardens which we had seen in the morning. The gardens cover about 30 acres and it was quite hard work dragging ourselves around as it was incredibly hot. We admired a huge ficus tree at the beginning of the gardens, but it turns out that there was an even bigger tree further on, which is an emblem and a well-known attraction of the modern garden; this was imported in 1845, making it nearly 170 years old (one wonders at what age it was imported). The picture doesn't give a good idea of how massive this tree is and how many aerial roots it has. 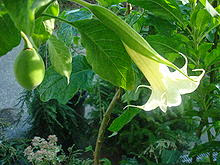 We also saw a bush which we had last seen on our trip to the lemoncello factory; as we were in botanical gardens, this time we could see the scientific name for the bush, which is datura cornigera, aka the angel's trumpet. Again, the picture doesn't match with reality: in Italy we have seen yellow flowers whereas the picture has white ones.

Leaving the gardens, we staggered back to the main road just in time to see the bus stop at our station, so we ran across the road and alighted, delighted. On the way back to the piazza, I saw one of those illuminated signs which shows the date, time and temperature: 38 degrees celsius! Once back in the apartment, we drank some more water, turned on the air conditioner and had long, cold showers.

It's now half past five, which means tea time. Shortly we will leave the apartment, go to Bon Toast for a cup of tea then choose a restaurant for our evening meal (we skipped lunch because of the heat). Today is our 33rd wedding anniversary!
Posted by No'am Newman at 6:40 pm