It's a rainy Saturday night here, making it the perfect time to hear Nick Drake on the stereo. His voice and guitar, combined with Robert Kirby's elegiac string arrangements, make the perfect accompaniment to the pitter patter coming from outside. The rain always makes me melancholic, whereas my wife (who looks after the kibbutz gardens and is getting more and more frustrated with our dry winter) is only too pleased.

I could have played a different cd, but I've been listening to this other disc so much for the past week that it was time for a change. Richard Williams was once an influential writer for Melody Maker at the beginning of the 70s (I used to read his articles with enjoyment) and then became an A and R man for Island Records (championing amongst others, Richard and Linda Thompson's "I want to see the bright lights tonight"), so I was pleased when I discovered his music blog about a year ago. True, he mainly writes about jazz, a style which I don't care for, but every now and then he writes something startling.

A few weeks ago (when I was ill with the flu), he wrote about William Blake and music which had created under Blake's influence by New York jazzman John Zorn (surely the brother of Richard Thompson sideman, Pete Zorn?). Williams writes " The group here is Zorn’s Gnostic Trio, in which two members of the Blakelight group, the harpist Carol Emanuel and Kenny Wolleson on vibes and bells, are joined by the guitar of Bill Frisell. The music is no less lively and active, often based on arpeggiated figurations reminiscent of the ostinatos of Terry Riley and Steve Reich, but its glistening instrumental timbres and the intimacy of the interplay between these brilliant musicians give it a character of its own. Here’s a track called “The Night of Enitharmon’s Joy”, referring to a female figure used by Blake to signify beauty and poetry (and possibly inspired by his wife, Catherine)." 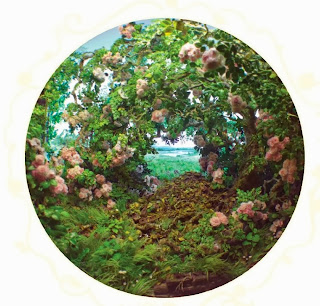 I don't know what it was about the above paragraph - maybe the mention of Riley and Reich, or maybe Frisell (I have a recording of him playing an instrumental medley of John Lennon songs in a beautiful and sunny style) - but something prompted me to click on the link to the track. I was transported! This is the kind of music to which I can listen for hours. After a certain amount of searching, I ordered the disc 'In Lambeth'. It arrived about a week ago and I've been listening to it frequently when at home.

I recorded “The Night of Enitharmon’s Joy” from that link; listening to it repeatedly inspired my virus affected body to write and record a track in a similar style.

Listening to the disc now, at times I am reminded of Stomu Yamashta's "Close to the edge" album from the beginning of the 70s, whose sleeve notes might well have been written by Richard Williams. I also hear echos in the music of Hatfield and the North, especially in the interplay between Fender Rhodes and electric guitar.

If there is anything to fault about 'In Lambeth', it is that the harp seems to be mixed too low (when it can be heard, it sounds more like a nylon strung guitar than a harp) and that the mixing has lumped together all three instruments, making it very difficult to isolate what each is playing. I would have much preferred a stereo image with separation, having the vibes and guitar on opposite sides with the harp in the middle.

There aren't exactly any melodies hiding in the nine tracks; I can now recognise a few, but most seem to provide an aural background, constantly changing, but never definite. I leave you with a few more words from Richard Williams: "It’s as distinctive, in its own way, as the Jimmy Giuffre Trio of “The Train and the River”, as close as that to jazz — in fact impossible without it — yet breathing quite different air. Beyond category, and highly seductive."
Posted by No'am Newman at 7:22 pm