On our first afternoon in Edinburgh, we discovered three things about the bus system
So we carefully counted coins, aggregated 7 GBP and set out this morning for Leith, buying two all day tickets. According to Ian Rankin, Leith used to be a rather dodgy area but now it's been gentrified. We had a short walk on the seafront promenade by the lighthouse there. Although the sun was out (and quite warm when it was shining), the air was cool and there was a cold wind blowing.

From Leith, we took the number 11 bus back to the city centre. As always, there was a piper playing near where the double decker tourist buses park (there seem to be a few pipers who take it in turns to play). My wife waited for an idle moment then approached the piper to have her picture taken. A few words were exchanged between them, presumably about her country of origin, for a moment later I heard the piper playing 'Hava Nagila'. To be honest, I didn't think such a tune could be played on the pipes (it uses a slightly odd scale), but the piper managed.

After walking from Princes St to the Royal Mile, my wife and I parted company. I was headed to the Royal Oak pub in nearby Infirmary Street, there to partake in the Rebus Walking tour. This was a two hour walk around the area, with special reference to places mentioned in the books. The guide (Colin Brown) is a jovial, Falstaffian, character and made a fairly dull (and very cold!) tour interesting. The highlight of the tour was arriving at St Leonard's police station and seeing a few nearby cafes and pubs which are mentioned in the books. After the tour ended, I walked back to Princes St where I met my wife for lunch. After that, we rode the bus once more in order to return to our b'n'b and have a little rest. I leafed through the tourist guide to Edinburgh and noticed that there was a shop near the Haymarket train station selling bagpipes, with a simple model priced at 90GBP. I thought that it might be worth a visit later on.

On the corner of our road there is a Cash Converters shop - this is an unfortunate sign of the times. People buy items which they either no longer need or can't afford and so sell them to CC, which is like a modern pawnbroker. I had noticed the day before that they had guitars, a violin and a flute in their window (along with other wares), so I thought it worth a short visit. A similar shop in the city centre was selling a 12 string guitar for a cheap price, but it would have been very difficult to bring it home with us. I looked around the local shop but saw nothing which interested me.

When I was leaving the shop, I happened to notice that there was something which looked like a small set of pipes in the window priced at 13GBP. I asked one of the sales people for a closer look, and indeed it was a set of practice pipes. Although I can't play the bagpipes and indeed have little idea how to do so, this seemed an ideal chance to acquire a set. At worst, the bagpipes will join my collection of musical instruments - guitars, mandolins, violin, concertina, oud and Irish whistle. 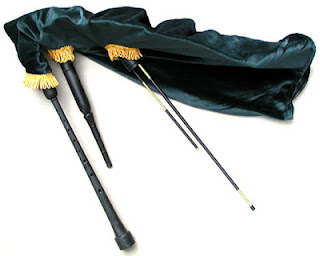 Later I googled practice pipes and discovered the model which I had bought. As the site puts it, These pipes can be practiced anywhere because they aren't loud like standard pipes. They are especially useful for bagpipers who want to do more practice on their highland pipes, but who have problems finding a place to play without disturbing the people around them. These also work well as a first set of pipes, after you gain proficiency on the practice chanter. An important note for would-be pipers: you still have to start with and work hard on the practice chanter before you play these! The blowpipe and chanter come off and make a long practice chanter when they are put together. This means that you get both a practice chanter and a set of practice pipes out of them.

I will try and visit the bagpipe shop in Edinburgh, mainly to see whether they have any suitable books on how to play the pipes, but also to ask how to produce a sound from the practice pipes. Presumably it will take some time before I too am capable of playing Hava Nagila (I'd be more interested in playing Flowers of the Forest).

If choosing and buying clothes makes my wife's day, then buying a set of pipes (whatever their shortcomings) makes mine.
Posted by No'am Newman at 12:04 am