I almost always eat fish for lunch on Friday: I'm at home and can cook myself something nutritious. The meal has undergone a few changes over the years: at first it was a grilled fillet of hake along with chips and salad, stuffed into a pita. I cut out the chips after my daughter pointed out that it wasn't good to eat chips if I was supposed to be dieting, and shortly after I cut out the pita, for the same reason. I stopped eating salad after I managed to spill the olive oil from the salad dressing onto my shirt, something which happened a few times, before I realised that I had better find a replacement for the salad. 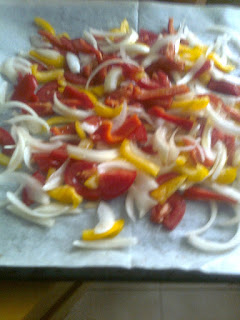 In the last month or so, I've frequently been preparing antipasti - a mixture of red bell peppers, yellow bell peppers, tomatoes and onions, all cut into strips, over which I drizzle olive oil. The vegetables are then baked in the oven (175 degrees Centigrade for 30-35 minutes).


On the left is a slightly blurred picture of the vegetables prior to their being placed in the oven. I find it best to place them on a sheet of baking paper as this keeps the tray clean.

After the thirty minutes is up, I then place on top of the vegetables a few hake fillets and spray them lightly with cooking oil (this stage may be unnecessary as I'm not grilling the fish) and put the tray back in the oven. After about five minutes, I turn down the heat in the oven - the food keeps on cooking but of course I save on electricity.

After another ten minutes, I take the tray out and serve the fish and vegetables (see picture below). 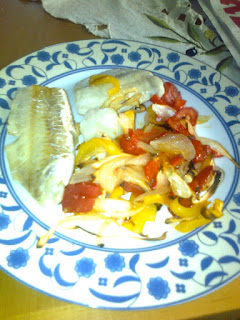 Completing the cooking theme, here is a picture of my new slow cooker, filled with vegetables and chicken pieces. The vegetables are underneath the chicken and so can't be seen. This picture was taken very early on in the cooking process, which is why there is no steam nor water droplets visible. My daughter doesn't like spices on the chicken which is why the pieces are 'naked'; I could add parsley or paprika to make things slightly more interesting, but to be honest, I too prefer the natural flavour of the chicken and the vegetables (onion, courgette, carrot). 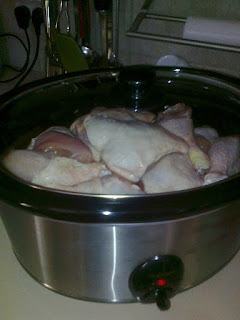